Rumaan Kidwai has cut his teeth in Indian and International cinema. Having worked with some of the masters, such as Wong Kar Wai, Kevin Macdonald, Mira Nair, Tarsem Singh, and Mani Ratnam, Rumaan is a keenly anticipated feature filmmaker, based in Mumbai, India. Fascinated by the real-life, cartel fueled journey of Dan Tito Davis, the author of the bestselling book Gringo, Rumaan has traveled halfway around the world to meet Tito in Wyoming, to ideate and plot future successes. We sat down with him today to find out why he is so enthralled with Tito’s story and how it could be a blockbuster on the big screen or a super successful miniseries on an online platform.

What was it about Gringo that made you believe it could be the next major movie Blockbuster?

The sheer substance of the story rarely does such a rendition emerge in the real realm. The Bandidos Motorcycle Club, enterprising pharmaceuticals, the Medellin Cartel, the FBI, the CIA, the DEA, the U.S. Marshals, Homeland Security, U.S. Customs, Interpol, local law enforcement agencies, immigration agents, mercenaries, guerilla organizations, professional kidnappers, career hitmen, vigilantes, human traffickers, dreaded gangsters, beautiful women and being an international fugitive for over 13 years across 54 countries. What more can I say? 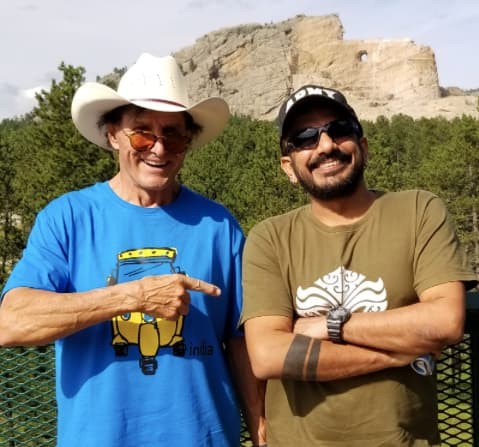 I instantly felt that its prospects were cinematic gold – it had Hollywood written all over it.

Obviously, you found Gringo to be very intriguing. What aspects caught your attention and made you want to get to know Dan Tito Davis better and explore the possibility of making a film with him? And what has that been like?

Having addressed the intrigue, and attention-grabbing factor of his account – meeting Tito, and having had the pleasure, and privilege of getting to know him, is another story altogether – one that is potentially worthy of a subsequent book.

Tito is a living legend – and a solid human being. I have found him to be a man of his word, with a strong sense of human values. In addition to which – he’s an extremely intelligent man, hugely aware, and an incredible conversationalist. Needless to say, he’s probably the most engaging storyteller that I’ve met.

Even though we are products of strikingly different cultural backgrounds and backstories, we’ve struck a terrific camaraderie, and are thoroughly enjoying our cinematic safari. I look forward to a successful movie mission – the groundwork for which has begun in earnest.

Your stepmother, Naina Lal Kidwai, is an alumna of Harvard University, and the first Indian woman to graduate from Harvard Business School. I’m sure she has been an inspiration to you in your personal and professional life. What aspects of that will you bring into this new

She is indeed quite the superstar, and a brilliant, and inspirational leader. I call myself fortunate to have such sources of inspiration in my life and have drawn from all of them. My father works in the social sector after two decades of corporate experience. My mother is a literary editor and ex-journalist. My grandfathers were in the army and civil service. My maternal grandmother was a terrific homemaker and had worked in military intelligence – just for good measure. Each of them is a unique individual, with a strong personality – each special in their own way. That’s a wealth of experience and inspiration – for which I am grateful.

I hope to bring my best to this project.