“Gringo: My Life on the Edge as an International Fugitive has been a #1 Bestseller on Amazon, it won the Gold Medal as Readers Favorite non-fiction autobiography of the year for 2018, and it has received numerous rave reviews in a variety of national and international publications.”

I had the privilege to interview best-selling author Dan “Tito” Davis. He comes from a town in South Dakota when he moved to Nevada-Las Vegas, he started manufacturing White Crosses, aka speed, and soon had the Banditos Motorcycle Club distributing ten million pills a week. After serving 5 years, he got into the weed game, but just when he got going, he was set up by a childhood friend. Facing 30 years, Davis slipped into Mexico, not knowing a word of Spanish, which began a 13-year odyssey that led him to an underground hideout for a Medellin cartel, through the jungles of the Darien Gap, the middle of Mumbai’s madness, and much more. You can get his audiobook here: https://gringobook.com/product/gringo-audio-book/. Read the interview to find out more about his best-selling novel.

Your best-selling novel Gringo: My Life on the Edge as an International Fugitive is based on your life. How did you become a fugitive?
I was framed by my childhood friend and was about to be convicted of a crime that I did not commit. That meant life in prison, so I took the only option available to me, which was to become a fugitive.

You were kidnapped at one point in your story what was that like?
By the time I was kidnapped out of Venezuela I had quite a bit of experience as far as being around people who have been abducted. Plus I had been close to being captured before then too. I knew that if I could get in contact with the people in charge, it was basically just a question of a figure for my release, by that I mean how much money they wanted.

In South America kidnapping is a major business, all businesses are about making money. I was confident that it was just a matter of negotiating my way out, but that’s not to say that I wasn’t afraid or I wasn’t concerned. I was confident that I could negotiate my way out. In fact, my kidnappers were talking to each other, in Spanish obviously, and they were saying this guy is too calm; he’s been through this before.

Your novel has been such a big success. Why did you decide to create an audiobook?
Friends of mine told me that they did not have the time to read the book themselves, but they wanted to hear my story. I spoke with the other people too, and one guy told me that he had his wife read him two chapters of Gringo every night before they went to bed.  After listening to these people, I realized that there was a market for an audiobook.

There are people out there who can’t physically hold a book to read it. They have to listen to the story.  They don’t have the time to read.  I knew that there was a market out there from professional drivers to soccer moms who are basically living in their vehicles.   That information made us decide to start working on the audiobook.

Do you think listening to your story will be different for people that reading about your life?
The story is the same it’s just in the way it’s told.  I guess an analogy would be – what is the difference between reading the news and listening to the news?  You’re reading the same thing that you’re listening to, it just a matter of how you absorb the information.  I believe the people who listen to the audiobook version of Gringo are going to definitely enjoy my story and the way it is told. 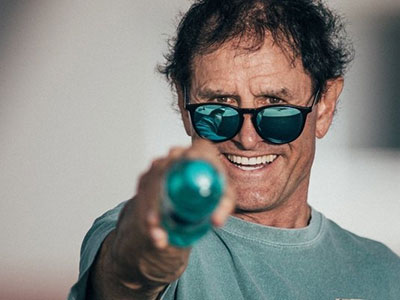 I can’t help but wonder what you will be doing next. Is there anything in the works you can tell us about?
Gringo: My Life on the Edge as an International Fugitive has been a #1 Bestseller on Amazon, it won the Gold Medal as Readers Favorite non-fiction autobiography of the year for 2018, and it has received numerous rave reviews in a variety of national and international publications. I believe the next move is to do a miniseries with the book as a base or a major feature film.

Most people are grasping for or trying to create quality material, we are in a unique position because we have the material and more. We have an excessive amount of phenomenal content. It is only a matter of time before a miniseries or a major motion picture is made with Gringo as the basis.